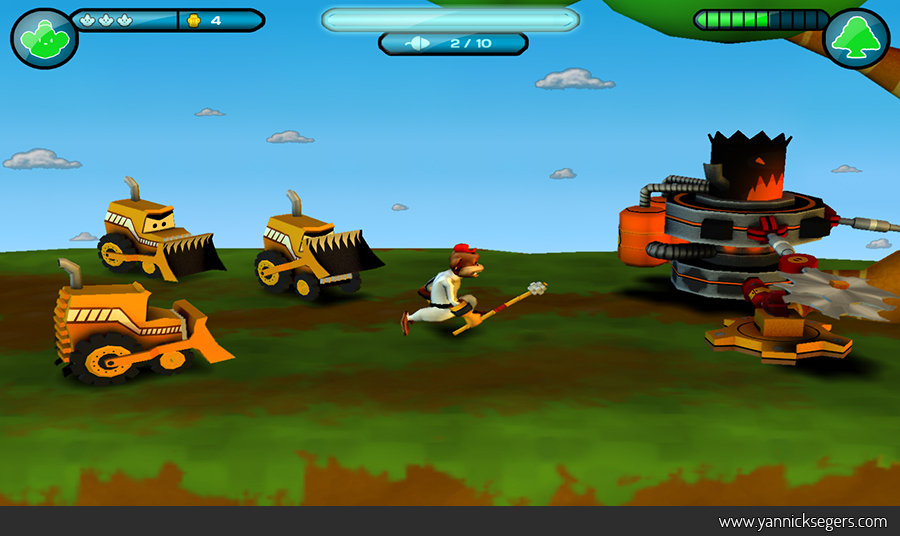 Purify is a platform-adventure game in which the world is severely damaged by deforestation and oxygen is scarce. Your goal is to replant trees to improve the environment. You do this by stopping the enemies with your gadgets, and planting trees and other plants with the seeds you harvest from other trees.

It is a group project we created for the Imagine Cup 2012. The team consisted out of two programmers and two artists.

The main gameplay consists out of planting trees and defeating enemies. Because of the low oxygen, you constantly lose health, unless you are in the neigbourhood of a tree, this is why you need to plant as many as possible. The enemies don’t attack the player directly, instead they go for the trees. The goal of the game is to stop the boss from destroying the tree of life at the end of the level. It is constantly losing health because it is being attacked by the enemies. Each tree you plant also gives some additional health to the tree of life.

Purify was coded in C# using the XNA4.0 framework and the open-source XNA Ploobs engine.

The game was our entry for the Microsoft Imagine Cup 2012 and got to the semi-finals (top 100 worldwide).

Some of the feedback we received from the judges:
“Graphics are ambitious, complex and well executed.”
“A great game with some neat concepts.”

m consisted out of the following members: