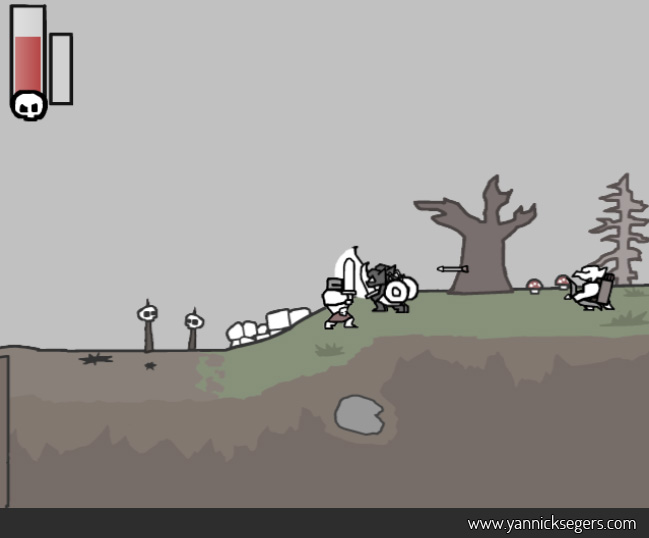 I made this game for our programming and math courses in the first year. It is a C++ clone of the flash game Barbarian Onslaught: The Secret of Steel. Not all of the features of the original game were implemented in my version though, due to the time constraint of my other courses. I had to implement all of the gameplay and the physics. The art came from the flash game itself.

In my version of the game, you have to beat the first level of the full game. The barbarian can do light attacks by pressing space, or heavy attacks by holding the spacebar. He automatically blocks incomming attacks if he is not moving, but there is a chance this can fail. In the real game there is rage bar that fills up everytime the barbarian hits an enemy. When it is full, it makes the barbarian go into a rage mode. The rage bar has been implemented in my version, but the actual rage mode not. You can also lift up the barrel that’s found in the middle of the level and throw it at an enemy. At the end of the level there is some food to replenish your health. The goal of the game is to defeat all the enemies.

This Barbarian Onslaught clone has been written in C++ on a basic engine provided by our university.

Picking up a barrel

Picking up some health

Some sample code for this project can be downloaded here